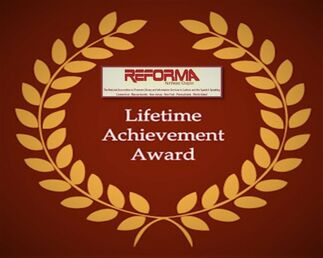 Note: Nominations deadline has been extended to May 29th, 2020.

Purpose of Award:
• The purpose of the Lifetime Achievement Award is to honor and recognize a REFORMA Northeast (RNE) Chapter  member who has achieved professional excellence and has made lasting contributions to promote library and information services to Latinos and the Spanish-speaking within the chapter’s region.

Criteria for Award:
• Candidate’s sustained lifetime contributions (his/her entire body of work, not just a single achievement) have been  significant toward the advancement of library and information services to Latinos and the Spanish-speaking on a national and/or international level. Contributions include, but are not limited to service, publications, presentations, mentorship,  research, education and training, innovative technology, and creative projects.

• Candidate is a current RNE Chapter member in good standing and has been active within the chapter for at least five years prior to his/her nomination.

• Candidate has worked consistently to assure and/or improve library and information services to Latinos and the Spanish-speaking over a continuous period of at least 20 years.

Award Guidelines:
• The RNE Chapter Lifetime Achievement Award Committee will make the formal award selection. RNE Chapter Lifetime Achievement Award Committee members are not eligible for the award during their committee service. Only candidates  who are recognized in the profession and as leaders in the field will be considered.

• The Committee Chair will send a Call for Nominations via e-mail to the RNE list-serv by March 15th every year, and will  also  make announcements at the winter/early spring general membership meetings. Active RNE members in   good standing wishing to nominate someone will provide the RNE Lifetime Achievement Award Committee with a Letter of Nomination  and the Nomination form, found on the RNE Chapter web site, by May 29th when applicable.

•  All members will send their nominations to the RNE Chapter Award Committee, who will review them and make their  selection(s) based on the award guidelines. Once a selection has been made, the Committee Chair will notify the Executive Board, which will authorize the appropriate expenses, formally notify the recipient and the membership, and  schedule the presentation of the award. Candidates will be excluded from selection discussions.

• The Lifetime Achievement Award is given only when candidates clearly meet or exceed eligibility criteria, and only once in  a candidate’s lifetime.

• The RNE Chapter Lifetime Achievement Award is to be presented at the Annual Joint Mini-Conference.

• Self-nominations will not be accepted.

• The recipient will receive $100.00 and a commemorative item.